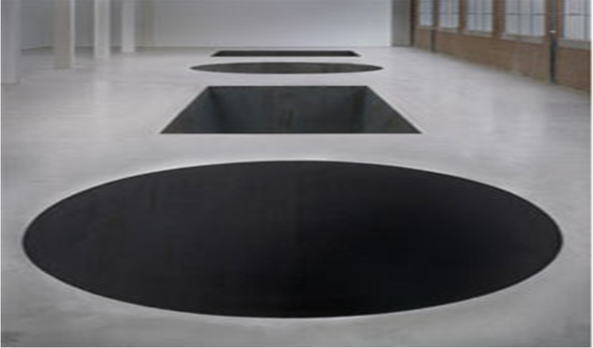 Although the "sculptural volume" of Double Negative was created by a massive movement of earth, performed with the help of heavy machinery, it isn't physical at all. Instead it is made literally of nothing, of negative space: the volume that traditionally defines a sculpture is described in these works by a void, by absence rather than presence. The first such "negative" form in Heizer's work was North, East, South, West, which the artist produced in wood and sheet metal in 1967, putting two of the four elements, North and South, in the ground in the Sierra Nevada in California. The work has now been constructed in its entirety as a permanent feature of Dia's museum in Beacon, in the size and material (weathering steel) that Heizer originally specified for it. These four diverse sculptural elements— two stacked cubic forms, one larger and one smaller (North); a cone (South); a triangular trough (West); and an inverted truncated cone (East)—together measure more than 125 feet in length, and sink from the floor of the gallery to a depth of 20 feet. When the work was first developed, such dimensions had no precedent in the art of recent times. 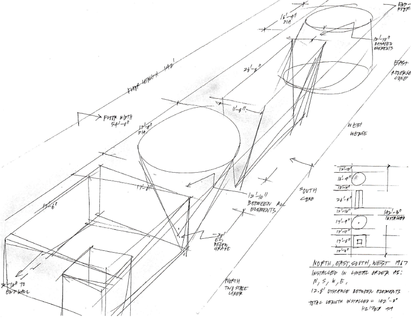 1. Using the images below, calculate the volume for each of the geometric shapes.

2. Once you have found the volume of the cylinder, how deep must the cone be to have the same volume.