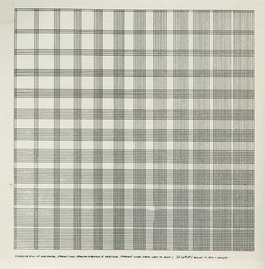 Drawing Series. . . exemplifies LeWitt's singular yet highly influential practice on manifold counts. Formulated from an initial idea outlined in a diagrammatic sketch accompanied by a set of instructions, it has been installed here by a team of trained assistants supplemented by volunteers, who rigorously followed the artist's directives, including his determination of its placement in relation to the particular configuration of Dia's galleries.  In the work of Judd and other Minimalists, the specifics of the modular system underpinning any individual work are not necessarily overtly legible, although they may be intuited. In LeWitt's art, by contrast, the conceptual program that determines the composition is always self-evident. Irrespective of the resulting degree of complexity, the point of departure—the preset schema—is literally stated, in the title, the accompanying diagrammatic instructions, or both. The straightforward formulation of the preset idea of Drawing Series. . . has here been exhaustively realized: all 192 permutations of the black pencil version are present.